As Texas Senator Whitmire and Chief Justice Nathan Hecht keep pushing to eliminate the constitutional right to bail in Texas (a right the Chief Justice swore to “preserve, protect, and defend the Constitution and laws of the United States and of this State”) by changing the Texas Constitution and replacing it with a computer program, there continues to be growing opposition from all sides of the issue on the Whitmire-Hecht bail reform bill – Senate Bill 628.  Opposing the bill are diverse groups from across the country and across the political spectrum.  Bail reform—sure—but not systems of risk-based preventative detention.

The Whitmire-Hecht bail system is two-fold – and nothing short of a carbon copy of the social engineering scheme being pushed across the country under the guise of bail reform.  Nothing new for Whitmire, after having failed to pass similar legislation last year, Whitmire has now enlisted the Chief Justice to advocate from the bench in the halls of the state legislature.

Senate Joint Resolution 37 proposes a change to the Texas state constitution to allow for preventative detention.  This changes the State of Texas from a right to bail state – to a state where a judge can detain you and deny your right to release.

Whitmire-Hecht follows in the footsteps of misguided politicians like Senator Kamala Harris of California, Representative Alexandria Ocasio-Cortez of New York and Senator Bernie Sanders of Vermont – the champions in this “end cash bail” movement.  Of course, making a founding constitutional right contained in the bill of rights simply vanish requires changing state constitutions across the country to eliminate the right to bail, thus empowering social engineers with their computer programs to decide who goes to jail and who doesn’t.  If giving Ocasio-Cortez et al the power to define who gets to stay in jail is the wave of the future, we should be very wary of it.  Whitmire-Hecht will bring Texas just that.

Texas, the next California?

The Whitmire-Hecht brand of bail reform just happened in California, Delaware and Idaho last year.  Idaho and Delaware came to their collective senses and killed their proposed constitutional amendment – the very plan Texas is considering now a second time. Despite the legislation in California, Senate Bill 10, passing (although it has been frozen due to a state referendum effort), it was opposed by 50+ civil rights groups including the ACLU, NAACP, San Francisco Public Defender’s Office, the Civil Rights Corps. (the group who brought the lawsuits in Harris County and elsewhere), and the Robert F. Kennedy Foundation.  Why?  Because giving the government expanded power to lock people up as a solution to mass pre-conviction incarceration is not only non-sensical it borders on farcical. 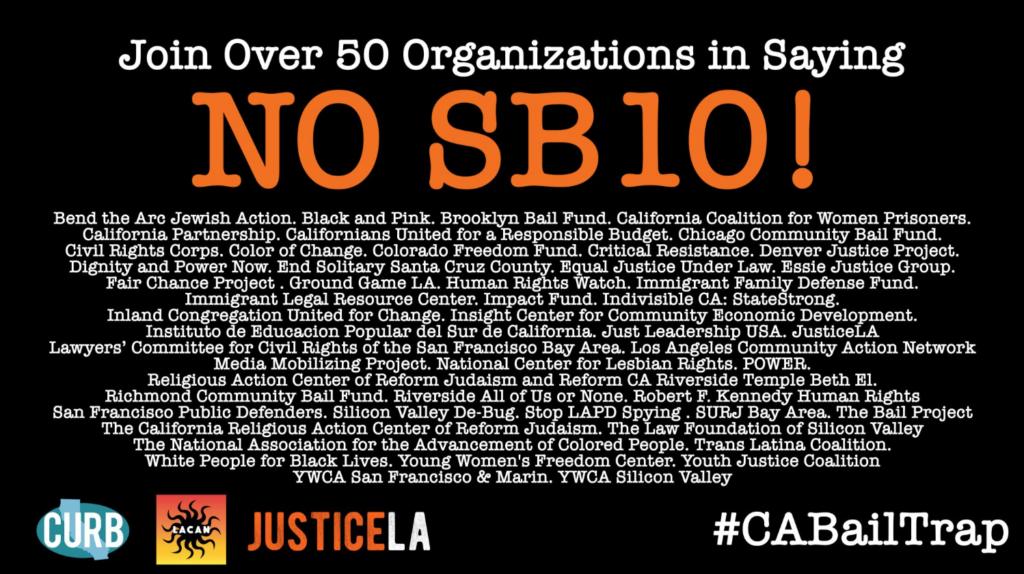 The California legislation, Senate Bill 10, included the extreme reliance on computer algorithms to sort people into categories to have their rights and liberties trammeled based thereon.  The Whitmire-Hecht plan is a mirror image.  The California legislature rejected the calls of over 100 civil rights groups to stop using risk assessment algorithms in criminal justice, a decision the Texas legislature also appears poised to make.

California attempts to pivot – but nobody is buying it.

Since the passing and then halting by referendum of Senate Bill 10, the California Supreme Court has taken quite a beating on their attempt to regulate the risk assessment algorithms and come up with a method to eliminate bias in the system.  The California Supreme Court has faced heavy opposition from Human Rights Watch and the Leadership Conference on Civil and Human Rights.   In addition, various law enforcement groups, victims’ groups, prosecutors, sheriffs, and others also opposed the California legislation.  The reason is that this bipolar bail system, while trammeling the liberties of defendants, is also unaccountable because it is a system of detention or release with no bail in the middle to secure the release of the defendant.

Listen to those who work in the field – not who watch from the bleachers.

In a recent Houston Chronicle op-ed (“Bail reform ideas let dangerous criminals go free”), Police Chief Josh Bruegger of Pasadena, Texas explained why public safety arguments are also a problem under bail reform.  Repeat criminals can simply get out over and over and over again, only to keep reoffending.  To compound the problem, they then thumb their nose at the system—with roughly 40% of those on these “unsecured bonds” simply don’t show up to court, creating gridlock in the system.

Definition:  Unsecured Bond – a monetary bond set by the judge for a defendant that doesn’t need to be paid (or a portion of) prior to release.  With unsecured bonds, the defendant simply signs to “promise” to pay the full amount of the bond if they fail to appear.

Jones was allowed to simply sign his name and walk out of jail with nothing more than a pinky promise to show up for his court dates despite being arrested only days before for unlawful possession of a weapon, a misdemeanor.

No supervision. No accountability.

Even after twice being arrested, including for aggravated robberies and an aggravated assault on a police officer, which are felonies, these dangerous, unsupervised releases allowed Jones to continue to freely roam our streets. And it’s these dangerous revolving-door practices that unnecessarily put our citizens and our law enforcement officers’ lives in jeopardy.

It was the decision of an individual judge to release Jones after being charged with felonies, but expect more like this when bail reform expands beyond misdemeanor courts. – Police Chief Josh Bruegger, City of Pasadena

Move over probable cause, welcome clear and convincing evidence.

If judges and prosecutors today are already letting repeat armed robbers out of jail on promises to appear or promises to pay and not requiring them to post secured bail, what is going to happen when prosecutors will have to prove by clear and convincing evidence in a matter of days after arrest that a person is dangerous or flight risk or they will be given a get out of jail free card?

What is going to happen when the police are called to testify just three days after an arrest, or will the jail doors just simply be flung open?  How is the state going to come up with the money for all of the due process that will be needed?  Plus, under a system of preventative detention, all defendants will have to be tried in a maximum of 90 days.  Of course, unlike the federal system there are no Texas Marshalls’ Service to chase defendants throughout the United States, into Mexico, and overseas.  The bail bondsmen handle that issue right now.

What will the Whitmire-Hecht plan do in Texas?

Whitmire-Hecht’s SB-628 and S.J.R. 37 is going to upend the criminal justice system and the delicate local and case-by-case balance that is currently in place in Texas.  Should these polices pass and they fund up the system and egg on the lock ‘em up mentality, the program is destined to backfire and lock more people up right out of the gate.  If the system is not properly funded, which we would love to see the price tag on that, then prosecutors and judges will have problems keeping up with the case load, releasing dangerous repeat criminals into the streets, only to wreak havoc on the community.  This is exactly what happened in New Mexico.  Just ask former New Mexico Governor Susana Martinez how these policies worked…

Should this happen, it will create additional political pressure to go back to the lock ‘em up mentality, which we saw in the federal system upon which the Whitmire-Hecht plan is based—24% were locked up in 1984 when the law was passed, 72% are locked up today.

Constitutional rights should not depend on the outcome of elections, how a computer program is built, or what some bean-counter in Austin recommends to elected judges about how to exercise their discretion.  We have a right to bail for a reason, and Texas should keep it.  Groups on both sides of the aisle realize the fallacy in all of this thinking.  We do too, which is why we drafted the Fourth Generation of Bail Reform.  Take a look at it.  We have sensical solutions to solvable problems.