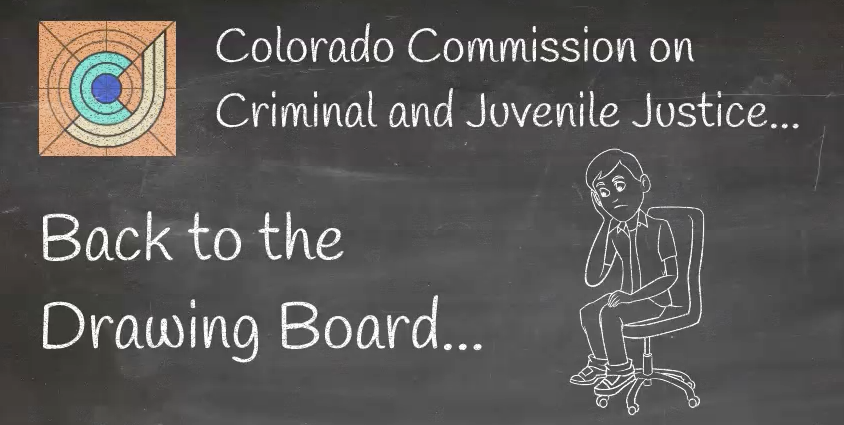 Oppose House Bill 1226: Time To Tell The CCJJ To Go Back To The Drawing Board

Oppose House Bill 1226: Time To Tell The CCJJ To Go Back To The Drawing Board

For several years the Colorado Commission on Criminal and Juvenile Justice (CCJJ) has been spending an inordinate amount of time in order to develop House Bill 1226 and their bail reform plan they plan to offer in 2020.  The purpose of CCJJ is to have a stakeholder process that leads to legislation that is fully-cooked so to speak, meaning that all of the issues have been vetted and the legislation is in a passable form.  It is that quiet contemplation and study, it was thought, that would bring the best criminal justice policy.

Pertaining to HB 1226, CCJJ recommended that the legislature move forward on a statewide pretrial services plan based on the use of an algorithm that has never been tested for racial bias.  In fact, the lobbyist for the State Public Defender admitted that fact on the record.  Since, it has been discovered that the existing Colorado Pretrial Risk Assessment Tool (CPAT) discriminates against those with mental disabilities in violation of the Americans With Disabilities Act.  We issued a cease and desist letter to Weld County, informing them that they were impermissibly discriminating, and we plan to contact the Colorado Civil Rights Division and US Department of Justice to file a complaint.  Of course, they don’t care—they failed to respond and are steaming forward anyway with the existing tool.

Now, all of a sudden, CCJJ is trying to save its flawed legislation by pivoting with amended language to HB 1226, despite having told the legislature that they spent a million hours putting together good legislation.   The House Judiciary Committee should reject CCJJ’s attempts.  While the CCJJ now is apparently concerned about the racial bias inherent in the risk assessment process it is important to point out one key fact—they were never concerned about racial bias or any other bias until they were called out on it.  In fact, it never occurred to them that the existing tool should be tested for bias.  Never worried about it, for years.  Now, all of a sudden, they are very concerned about bias—primarily, we believe, simply because they want to pass a bill.

In fact, in the amendment package they are putting forward, there is no requirement that the risk tool meet any particular standard in terms of bias.  For example, that the tool has been tested and shown not to increase or magnify bias in the system.  Instead, in L.008, the CCJJ wants to amend their bill to say that the risk assessment instrument should have been “evaluated, developed and validated” to reduce bias.  What does that mean?  That is merely paying lip-service to the issue.  CCJJ also then says “judicial reliance” on the tool must be evaluated for bias.  Meaningless standard number two.  Obviously, this is not too urgent of a problem for CCJJ—they are giving the Department of Public Safety nearly two years to evaluate whether the tool is biased.  In the meantime, it still is an invalid tool having not been revalidated, and as the State Public Defender’s office has said, it has not been evaluated for racial bias.

As it turns out, the CCJJ is now concerned about bias in the system.  But this concern is neither immediate in their view, nor does it require the risk assessment to meet any particular standard.  Plus, CCJJ does not care about transparency—they are going to allow risk assessments to be black-box by preventing the public from being able to audit, inspect or test the risk assessments.  Full transparency has been recommended as best practices in this area for at least the last two years.  But, apparently, the comprehensive study done by CCJJ and its crack researchers missed this important study from New York University, where the first recommendation is, “Core public agencies, such as those responsible for criminal justice, healthcare, welfare, and education (e.g “high stakes” domains) should no longer use “black box” AI and algorithmic systems.”  The study goes on to recommend that, “The use of such systems by public agencies raises serious due process concerns, and at a minimum they should be available for public auditing, testing, and review, and subject to accountability standards.”

Just yesterday, additional research has come out from Professor Robert Werth of Rice University, who is urging jurisdictions to proceed with extreme caution as they go down the road of risk assessments.  Recall, last year, Werth accused risk assessments of contributing to the problem of generational mass incarceration, from a press release issued by Rice University in Houston:

‘It has been argued that risk assessment tools could help stem the tide of mass incarceration,’ Werth said. ‘However, the evidence suggests that thus far, risk assessment instruments have contributed to expanding the number of people enmeshed in the criminal justice system – encompassing imprisonment, probation and parole.’

Werth followed it up with another forthcoming study, and again Rice University issued a press release on April 8, 2019:

Werth said previous research about actuarial risk assessment raises important questions about its constitutionality and ethics. “These calculations can ultimately lead to people being punished for what they might do rather than what they have actually done, which would seem to violate our standard conception of due process,” he said.

Werth cautions against rushing into actuarial risk assessment in criminal justice, noting that while it may help reduce inconsistencies within a particular location, it can also lead to certain people being targeted more often.

“Proponents argue that it is a objective, scientific and transparent way of reducing discrepancies in the system,” he said. “However, there are numerous reasons to be cautious and concerned about their potential for negative impacts. First and foremost, research shows that they may reproduce class-based and race-based inequalities. Further, some of the available assessment tools use proprietary algorithms developed by for-profit companies, which raise questions of transparency and fairness.”

As the House Judiciary Committee looks at bail reform, we can tell you, this is not bail reform.  This is algorithmic injustice that will serve to reify the existing system, and, likely, magnify existing bias rather than reduce it.  In contrast, House Bill 1225 and Senate Bill 191 are in fact bail reform —eliminating nuisance bail on low-level cases and requiring prompt pretrial liberty are important moves forward.  It is completely and totally irresponsible, however, to expand the risk-based system of supervision and spend a minimum of $7 million annually when the State has so many other criminal justice needs.

Apparently, CCJJ thinks they can ignore studies from major universities and print their own money to fund their justice-by-algorithm program.  It’s time for the House Judiciary Committee to send CCJJ back to the drawing board.