In a letter being used by Americans For Prosperity (“AFP”) to argue for expanded bail reforms in West Virginia, AFP encouraged the West Virginia legislature to move forward on bail reform because West Virginia needs to “follow the example of states like New Jersey,” who, AFP argues, has “meaningfully lowered the burden faced by taxpayers.”  In fact, according to AFP, “AFP seeks to support free markets and entrepreneurship by advocating lower taxes and limited government spending and regulation.”

AFP is wrong about New Jersey bail reform, and AFP’s position on New Jersey bail reform is contrary to AFP’s mission.  According to Dr. Darius Irani from Towson University, who has specifically estimated the benefits and savings of the New Jersey program, the program did not save money and instead created a huge tax burden for New Jersey tax payers while simultaneously eliminating an entire industry, the bail bonding business, that handled the bail issues for free at no cost to the taxpayer.

According to Dr. Irani, even net of savings, the New Jersey program conservatively cost the State approximately $70 million in 2017.  Since the program got started through the end of 2019, New Jersey has conservatively expended $290 million on its bail reform, which includes supervising 91% of all defendants released from jail in addition to other costs.  On a per capita population basis, one might then assume that West Virginia would conservatively need $59 million to implement New Jersey’s system in the first three years.  On a good day, that “investment” will produce $5 million annually in jail cost savings.  Of course, it is important to note that the decades long reduction in the jail population in New Jersey, not caused by bail reform, has finally stopped—in 2019 the jail population increased for the first time in nearly two decades, so the “savings” will certainly not continue and might be thought of as a one-time adjustment if the decrease is attributable to bail reform, which is still an open question.

Further, this is why the New Jersey Counties sued the State of New Jersey, not because of all the “savings” to taxpayers but instead for an unfunded mandate that would indeed fall on county taxpayers—which it ultimately did.

In point of fact, the New Jersey program is out of money, which was funded using court filing fees, with the burden to now shift entirely to taxpayers using general tax revenue.  According to the New Jersey Courts: “Projected annual deficits are expected to fully deplete what remains of the modest reserves that accumulated during the start-up period before January 1, 2017. Those reserves have been drawn on each year since. We estimate that the program will face an overall negative funding balance in late fiscal year 2020 and early fiscal year 2021.”

Does the New Jersey work better and protect public safety?  Nope.  By all measures, the system increased the rate of failing to appear in court by 45%, increased crimes while on pretrial release by 8%, and did not solve many of the underlying problems, like racial bias, it was purported to solve. 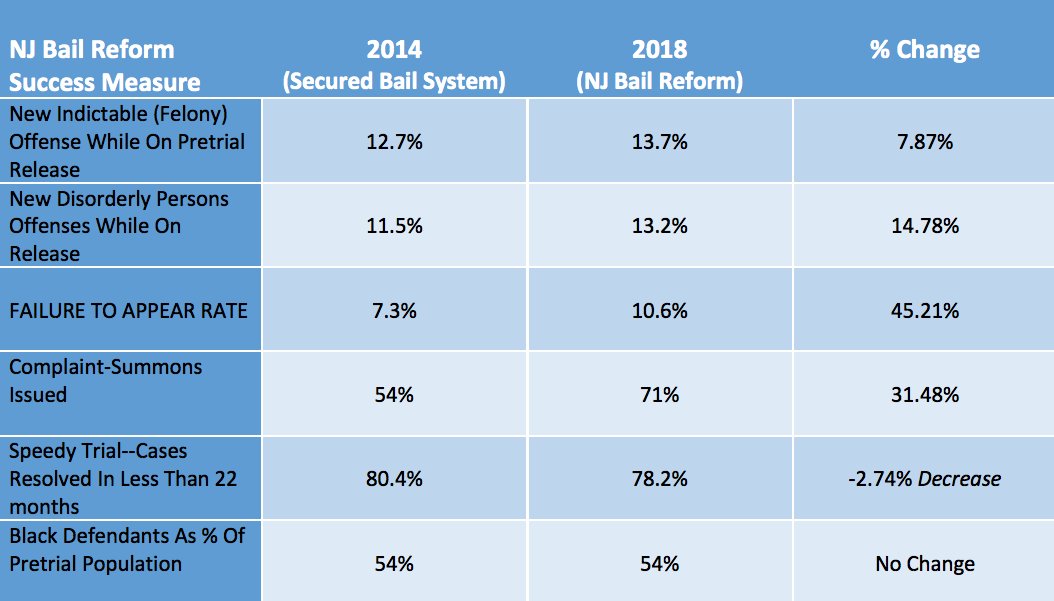 RELATED:  New Jersey Bail Reform, the Numbers Are In: State Spent Hundreds of Millions of Dollars to Get Worse Results

Americans For Prosperity might want to get its facts straight before it starts telling legislators that something that purports to save West Virginians tax dollars will actually result in a massive tax increase on them.  That doesn’t exactly sound like “prosperity,” especially since new crimes and failures to appear in court will also increase.