The Numbers Are In: Legislative Crack-Down on the End Cash Bail Movement in Houston is Reducing Pretrial Crime by Repeat Offenders

As crime spiked in Houston, due to bail reform, according to District Attorney Kim Ogg, the once darling of George Soros, Ogg called a friend of hers: Senator Joan Huffman.  Together, they advocated for and moved forward bail reform legislation in Senate Bill 6 that ultimately gained the support of the entire legislature and both Governor Greg Abbott and Lieutenant Governor Dan Patrick.

Recall, DA Ogg made a strong case for the Damon Allen Act in the second special session of 2021, a law named after a former Texas State Trooper Damon Allen who was killed by a defendant let free by a judge who did not have the proper criminal history information and unfortunately set the bond way too low. 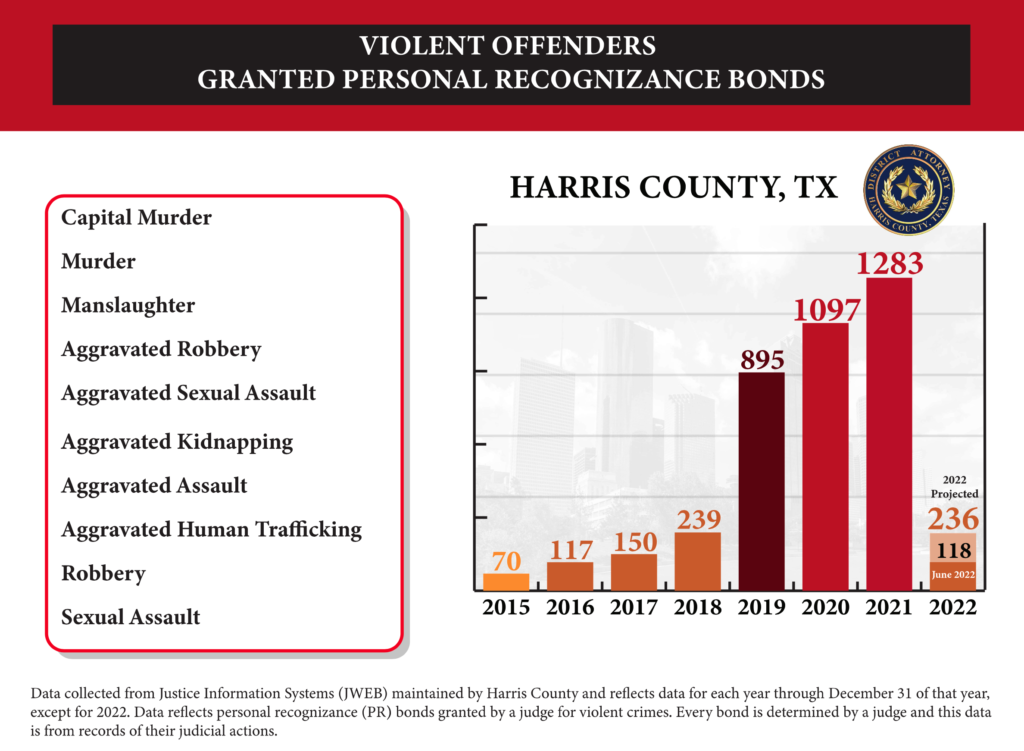 We learned last year that as a result of bail reform in Houston, the number of violent felony defendants who got out of jail free on a personal recognizance bond (“personal bond”) went from 70 in 2015 to 1,283 in 2021 – an increase of 1,732.86%.  Crimes defined as violent included capital murder, murder, manslaughter, aggravated robbery, aggravated sexual assault, aggravated kidnapping, aggravated assault, aggravated human trafficking, robbery, and sexual assault.  These policies had a direct impact on new crimes for defendants released on personal bonds – from 6,348 in 2015 to 22,610 in 2020.

Of course, if you thought they were all first timers who made a simple mistake—think again.  The number of persons out on 2-4 bonds increased by 413.69% between 2016 and 2021.  Those on 5-7 bonds increased by 2,866.67% during the same time period, and those on 8+ bonds can’t be described on a percentage basis because there were zero such releases in 2016, and there were 141 defendants out on 8 or more bonds in 2021!  All of this spelled major trouble by emboldening repeat criminal behavior in Houston and increased crime as Ogg testified. 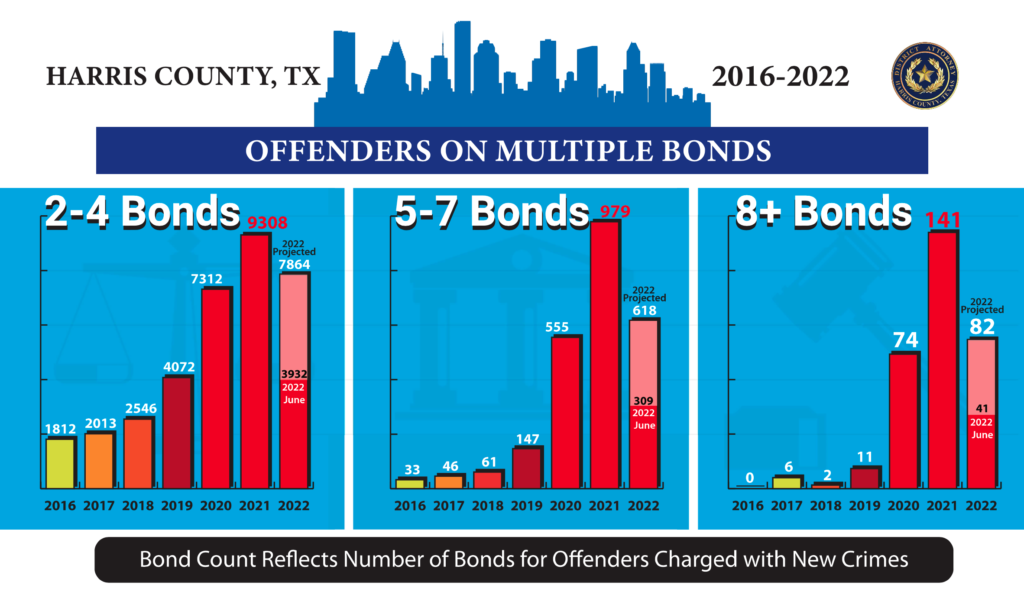 So, the bipartisan conclusion last year was clear: “cash bail reform” in Houston was a mess.  Now, what should be done about it?  Enter Senate Bill 6, which really is quite a simple concept.  You don’t get a free bail if … and there are many circumstances where the legislature said no more free passes in these categories, categories designed by the legislature to ensnare repeat defendants.

District Attorney Ogg recently testified before the Texas Senate Finance Committee, and the numbers show that Senate Bill 6 is doing exactly what it was designed to do: reverse bail reform and decrease pretrial crime.  The number of defendants out on 2-4 bonds, based on the numbers, decreased 15.51% in the first year of effect.  As to 5-7 bonds, the number of those defendants decreased 36.87%.  Those true recidivists out on 8 or more bonds decreased by 41.8%.  Thus, that population remains in jail, and cannot re-victimize the community.  For the majority of those that are released, they now have to find a personal surety to vouch for them—either a friend or family or a bail agent with arrest powers or both.  That also is increasing accountability within the system.

The conclusion as it turns out was that judges should not have been releasing violent and dangerous offenders on “personal recognizance” bonds in the first place.  The judiciary in Houston, much like the rest of the country, fell for the false promises of bail reformers who guaranteed everyone that bail simply doesn’t matter.  Despite 800 years of tradition of the ancient practice of securing oaths, we could simply toss it aside.  The empirical proof is that bail does matter, and in particular, when you give get out of jail free cards to career criminals, bad things happen.

As policymakers around the country begin to look for solutions to bolster accountability and increase the level of deterrence for violent and repeat crime, they may want to take a serious look at Senate Bill 6 from Texas.  It is doing one thing, and it is doing it well: reducing the number of severely hardened recidivist criminals on Houston’s streets by 41.8% in the first year.