Up until recently, charitable bail funds have been quietly amassing hundreds of millions of dollars in donations – money they claim is earmarked for their army of “bail disruptors” to post cash bail for those charged with offenses who would otherwise be stuck in jail.  From west coast Hollywood celebrity elites to the U.S. Vice President herself, support for these funds has exploded through crowdsourced fund raising.

As millions poured into these funds, the true nature and danger of these funds were quickly revealed.  First, calls for transparency and backlash came when the Minnesota Freedom Fund (MFF, the fund V.P. Harris tweeted in support of) revealed that only $200,000 of the $30+ million in donations actually went to bailing someone out.  Then came the public safety concerns when multiple stories began to come out where a fund had posted bond for a dangerous offender who later went on to commit more crime – even murder.  In September, MFF posted bond for an alleged domestic abuser only to have the defendant then be charged with murder in a road rage incident.  Other beneficiaries of these bail funds include those charged with sexual assault and assault on a police officer, just to name a few.  All this should come as no surprise.  Greg Lewin, former Executive Director of the Minnesota Freedom Fund was quite clear on their approach in a Minnesota Fox 9 interview when he said of those he bails out, “I often don’t even look at the charge when bailing someone out” because it’s “not the point.”  Lewin added that those who are saying “F the Police” should really be saying “F the Courts.”

Of these funds that continue to dominate the news, the largest and most prominent national bail fund is The Bail Project.  The Bail Project has an extensive team of “bail disrupters” across 33 locations in various states and are led by Robin Steinberg – a former public defender now cashing in on her “non-profit” with a healthy 6 figure income.  More on that later.

The Bail Project has come under pressure recently in Indiana when it was revealed that the fund posted bond for several dangerous offenders – Marcus Garvin was arrested for the murder of his girlfriend after the Bail Project posted his bail relating to a stabbing at a gas station.  Travis Lang was arrested for the murder of Dylan McGinnis after his release on drug charges with help from the Bail Project.  A local investigation later revealed that the Bail Project had been supported by local judges in Marion County, Indiana by entering into an agreement to allow the fund to avoid costs of fines and fees normally associated with the posting of cash bail and to allow the funds used for these postings to go directly back to the Bail Project and not the defendant. Marion County has recently suspended that agreement over public safety concerns.  Adding to these concerns, it was also revealed that the Bail Project was using taxpayer funds to post cash bail for defendants by way of $150,000 in crime-prevention grant money awarded to the fund by the city of Indianapolis.

As the fallout from the Bail Project in Indiana continues, there is much more to learn about The Bail Project and how they operate, including the $62 million war-chest they started the year with.  As calls for accountability widen, it is truly time for regulators, lawyers, judges, public officials, and legislators to increase the scrutiny on the Bail Project and similar crowdsourced bail funds.  For, when the final numbers are in, what we will collectively realize is that creating a well-funded national non-profit to bail people out as a method to “end the cash bail system,” for which donations are provided, is not only disingenuous, it may even border on charity fraud.

Contributors on crowdsourcing websites are often inherently anonymous, and, even if not, they are usually removed from the defendant's close social network.  If there is little or no relationship between the defendant and those supplying the money, the bail money provides no incentive to prevent the defendant from simply fleeing the jurisdiction.  This is especially true if the money does not have to be paid back or, even if it does, if lenders are unlikely to collect.  Moreover, besides these main public policy concerns, there are many other ancillary issues that crowdsourcing presents, such as the burden placed on the prosecution, the lack of regulation as opposed to other entities in the bail industry, and the potential for the defendant and surety to actually profit from this scheme.

Of course, when a defendant has a bond posted by crowdsourced funds, they similarly have no incentive to comply with their terms and conditions of bond because there is no risk of forfeiture of bond.  In other words, they have no disincentive to not commit a new crime and have a bond forfeited for violation of terms and conditions of bond because the source of the funds is too remote.  No one has any skin in the game whether it be the donor, the fund, or the defendant.  As a matter of law then, the Bail Project is posting bonds that are an insufficient surety under the law.   Ms. Loeb’s conclusion is that such bonds by the Bail Project should be entirely prohibited, or, in the alternative, there is a need for strong oversight and regulation.

Second, the Bail Project ended FY 2020 with $62.2 million on hand for their national network of bail funds operating in 33 states.  Their total expenses were $9 million in the fiscal year.  Of that, $6.65 million (or 73.8%) of the expenses were for “salaries, other compensation, employee benefits.”  Advocacy is expensive business it appears.  To travel the country helping the indigent, it takes an Executive Director in former public defender Robin Steinberg a salary of $303,600, an Assistant Secretary pulling in $244,570, a CFO raking in $203,564, and a Chief of Staff taking in a paltry $141,047 to name a few.  All this in the spirit of justice for the indigent.  What’s it take to travel around the country checking in on these 33 locations you ask?  $425,107 according to the FY 2020 filing. 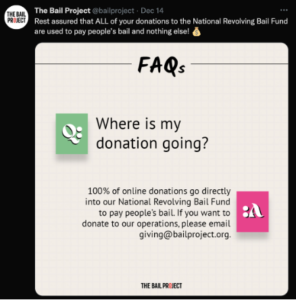 assistance for over 17,000 low-income people across the country. They also provide post-release support through court reminders, free transportation, and voluntary referrals for housing, substance use treatment, and other services based on a person’s needs.”  So, it is not clear where all of the donations go.  Another section of the website points out that 100% of “on-line” donations are used to pay peoples bail.  In a tweet on December 14, the Project once again says “on-line” donations are 100% to pay bail.  So which donors go to paying the “operations” exactly?

Forth, much of the money raised by the Bail Project and other funds were on false pretenses: bailing out peaceful protestors in the summer protests of 2020 for example.  Many a donor (average of $87 according to the Bail Project) donated specifically to bail out peaceful protestors.  The Project actively promoted this narrative on social media.  On June 11, 2020 the Project retweeted: “The @bailproject’s revolving bail fund continues to support protestors who cannot afford cash bail.”  On June 2, 2020 the Project denounced violence by police against protestors.  Retweets of John Legend and Christy Tiegen donating $100,000 to “to the bail outs of protestors across the country” garnered much attention…and thousands of additional funders.

For weeks the Project pushed the narrative of standing ready to “provide bail assistance to protestors.”  Yet, for all of the money raised, how many protestors were actually bailed out during such period of protests and after?  The Washington Post reported on the fact that the money raised to bail out peaceful protestors barely made a dent in the tranche of cash raised.  For example, of the 10 of 170 protestors arrested in Minneapolis between May 26 and June 2, 2022, they had to post bails ranging from $78 to $100.  157 of the 170 were released on their own recognizance without having to post any bail.

Lastly, there are a lot more projects the Bail Project works on besides the project of posting bail.  For example, the Project was “proud to have worked with George Gascon as part of his transition team on bail policy” that lead to the Los Angeles County DA’s no bail policy that, coupled with zero bail, is creating an absolute crime wave in California.   The Project has also gotten into the business of hiring lobbyists.  We are not sure for what, but the financial records also reflect that.  In fact, the Project recently hired a lobbyist in Michigan according to a tweet on their twitter account.

As we move into 2022, it’s clear that these organizations crowdsourcing bail funds should be held to a higher standard and regulated to ensure transparency with their donor base and the general public.