There are two billboards at the intersection of North High and West Broad streets in downtown Columbus, Ohio that inform us of the support of the public for more criminal justice reform and bail reform in Ohio.  While we often question whether such polls are misleading, what we do know is that even if these polls are not misleading, they are simply out of date: the shift in public opinion on bail reform and criminal justice reform is marked.  And, it includes democrats, republicans, and independents. 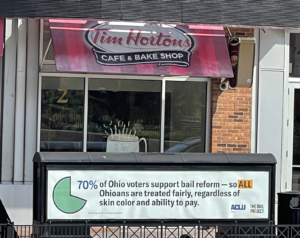 Marketing Resource Group, LLC, an independent polling company in neighboring Michigan, recently published their anticipated spring poll and the results, while limited to voters in Michigan, were stunning.

On the question of concerned with crime, of all voters, 68.1% are concerned about crime.

Regarding bail reform, the poll asked a series of questions concerning whether the public supported the current bail reform efforts, and if not, what reforms the public might embrace.  There is currently legislation in Michigan similar to what was enacted (and later twice significantly rolled back) in New York, premised on the concept that persons who cannot afford their bail should not be held in jail.  Ohio also has legislation pending (S.B. 182, H.B. 315) that would create an absolutely right to an affordable bail and remove judicial discretion.  Do the voters agree?  Far from it…

As to the proposed reforms, of all voters, 67.4% oppose the Michigan legislature changing the law to require the release of those who allege they cannot afford their bail.  84.6% of Republican voters oppose such a change.  64.9% of all voters oppose lowering or eliminating bail bonds in the criminal justice system in Michigan.  78.8% of all voters oppose restricting judicial discretion to set bail in criminal cases (note, in Michigan, the legislation has a list of offenses, like previously in New York, where judges cannot set bail no matter the circumstances).

So, while we keep hearing that bail reform does not increase crime, it is clear that the bail reformers either need some new data to put on the signs attached to the newspaper machines at North Broad and West High, or an entirely new PR effort, because the public simply isn’t buying it.  Their elected officials, however, may want to take note.

2022-05-03
Previous Post: Third Time is Not the Charm for Failed Bail Reform Movement
Next Post: Bail Reform in Houston: A Half-Decade of Bail Reform Malfeasance Comes to Full Fruition