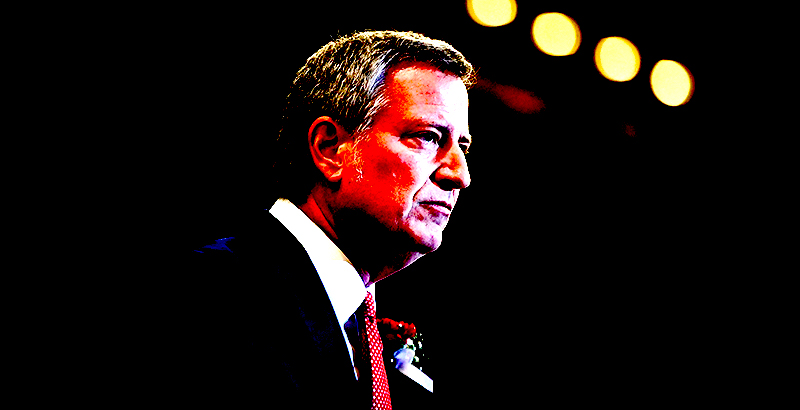 Mayor Bill de Blasio, as recently as a few days ago, was a fierce advocate in favor of New York’s latest bail reform law which took effect on January 1.

New York City Mayor Bill de Blasio defended the no-bail policy in a Fox News appearance Sunday, stating that under the old laws most defendants were released after making bail, and if the only reason a person is kept behind bars is because they cannot afford bail, then that does not solve anything. - Fox News

For anyone to oppose it was somehow fear-mongering.  Yet, today, Mayor de Blasio is now calling for significant changes to the very bail reform law he supported.  He now calls for changes like those passed in New Jersey to deal with defendants who are a danger to a person or persons in the community.

The big problem with the Mayor’s solution?  New Jersey’s legislature and citizens under then Governor Chris Christie amended the New Jersey State Constitution to allow for preventative detention, detention without bail, of so-called dangerous defendants.

While New Jersey is now a failed system in our view and is also inconsistent with New York’s constitutional tradition, Mayor de Blasio’s new solution to the problem is to allow new expanded powers for the State of New York to obtain preventative detention and deny bail altogether of defendants based on whether someone “poses a threat to the surrounding community.”

RELATED: New Jersey Bail Reform, the Numbers Are In: State Spent Hundreds of Millions of Dollars to Get Worse Results

This would be a complete reversal of ground on New York’s history of rejecting preventative detention policies since the Federal Bail Reform Act of 1984 and dating back to the Rockefeller administration.  The federal system, created in 1984, has tripled pretrial detention to a staggering 72% of all defendants.  The New Jersey system, which began in 2017, is starting to trend in that direction as well with what was then called the “limited used of preventative detention” having motions filed for preventative detention in 49% of all indictable crimes in New Jersey – and locking up defendants in 42% of those cases.  How serious is it?  In 2017, 8,043 defendants were denied the right to any form of bail.  In 2018, 8,669 defendants were detained.  In 2019, New Jersey is on pace to deny any form of pretrial freedom for 8,970 defendants.

New York doesn’t need the Mayor’s knee jerk extreme solution to fix bail reform, and it doesn’t need to implement a costly, inefficient New Jersey system (insert a footnote or link to one of our other posts, not worth the money, etc.) that eliminated the right to bail New Yorkers believe should instead continue to be a constitutional right.

RELATED:  New York Times Gets It Factually Wrong on Bail Reform – New York Did Not Implement The New Jersey Bail System And Is Going To Just Throw Open The Jail Doors

Instead, cooler heads should easily prevail on this.  Policy-makers should note that according to the Vera Institute of Justice, New York is the only state that does not allow judges to consider, as merely one statutory factor in a basket of statutory factors, the dangerousness of a defendant to a person or the community in the setting of bail and also conditions of release, such as supervision, ankle monitors, etc.

“New York was, and remains, the only state in the country that precludes judges from taking into account any consideration of public safety when setting bail or imposing pretrial detention. … In 1984, Congress passed the Federal Bail Reform Act, which introduced public safety in the federal bail system and survived a constitutional challenge in United States v. Salerno.  Since then, 49 states, all except New York, have changed their bail laws to allow judges to consider both risk of failure to appear and public safety in pretrial decisions.”  -  Vera Institute – July 2019

In addition, judges should have expanded and restored discretion under any future law changes, with the law continuing the presumption in favor of own recognizance release, that then may be overcome with evidence demonstrating good cause shown, including a risk to a person or safety of the community.  The fact is, judges were already releasing low level offenders without any condition of release.  City Journal contributing editor Heather Mac Donald recently noted that 93% of misdemeanor defendants are already released in New York without having to post any form of bail – and only .6% of the jail population are actually in jail on a misdemeanor charge.

Better focusing judges’ attention on dangerous defendants and those that are a flight risk will create the best balance of community safety and use of scarce public jail resources.  The judges are there for a reason—we just need to let them do their jobs.